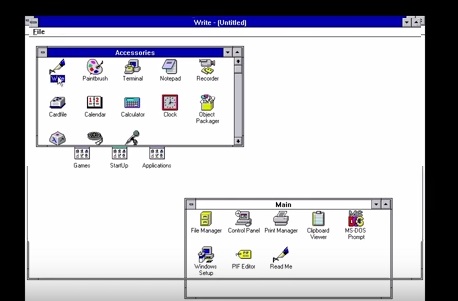 This is a bit of a yes and no question as I will explain.

The Raspberry Pi 2 can run Windows depending on the version and the setup.

Since the RasPi uses a ARM CPU and not a X86 based CPU Windows cannot be installed as it would traditionally.

The exception to this is Windows 10 which has a development environment version of Windows 10 that can be installed on a RasPi.

The ARM Windows 10 version is not a full version and is meant to help developers setup IoT (Internet of Things).

This means that a Raspberry Pi with Windows 10 is pretty useless. It cannot run other software such as Word, Excel, or even a browser.

It can run a virtual machine which will allow for a install Windows XP and Windows 7 but they are extremely slow.

For example a RasPi running a Linux based OS such as Rasbian can install a virtual machine that replicates a X86 CPU.

Windows can then be installed into the virtual machine.

Currently the fastest X86 virtual machine for the Raspberry Pi is rpix86 which duplicates a 486 computer running at 20 Mhz.

Other popular emulators are Qemu and Dos Box.

This is very slow way to run Windows XP or Windows 7. Windows 95/98 even crawl at a extremely slow pace.

The only real version of Windows that can run at a good speed is Windows 3.1 and DOS.

Summary
Currently running Windows on a Raspberry Pi 2 is not realistic.

It can be done and is fun to play with but as far as any real world applications it does a poor job.

Things are constantly changing so it is possible there is someone working on a faster X86 virtual machine for the RasPi.