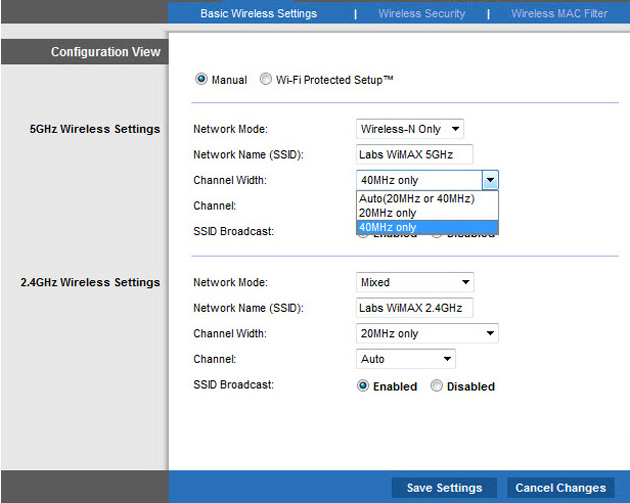 Many routers are now coming with the ability to change the channel width and tweak the setting to get better performance.

What is channel width?
Channel width can be thought of like a highway. A four lane highway can handle more cars than a two lane. Of course the bigger the highway means more of a chance of accidents happening.

Channel width works the same way it opens up more lanes to transmit data but this can also case packet collisions in a crowded environment that can slow down the speed since a router must resend the data.

This means that in a crowded city with many routers talking a smaller channel width is better and transmits father. While someone in the country side with no other routers in range will be able to use a wider channel to get better performance from a router.

By default most routers work in the 20 MHz range on each channel. This can be increased to 40 MHz to get more width.

It should be noted that router working in the 2.4 GHz range only have 20 MHz width before they start interfering with other channels.

For example if a router is on channel 6 and working on the 2.4 GHz band if the width of the channel is increased to 40 MHz than it will also partially transmit on channel 5 and 7.

The new 5 GHz range is better at handling width and may even come with 40 MHz as the default setting.

So what does this all mean?
If you want to tweak performance with gaming or high-definition video streaming and have a dual-band 2.4/5 GHz router, try setting the 5 GHz network’s channel width to use 40 MHz, instead of the slower 20 MHz channel. Be sure your devices support 5 GHz and can connected to the 5 GHz band of the router.

Note that you’ll be sacrificing some range at this setting, but then you won’t want to be broadcasting video over great distances. Still, if you have other devices at the edge of the router’s range, you may want to add a repeater, if you find that the 40 MHz channel’s range limitations are too great. Check out Top selling Wireless Booster Range Extender reviews for more information on Range extenders.

One last thing to mention is the channel most routers by default go to is channel 6. If you use a higher channel such as channel 9 by manually setting the option it often you will get better results since there will be less traffic and so less packet collisions.