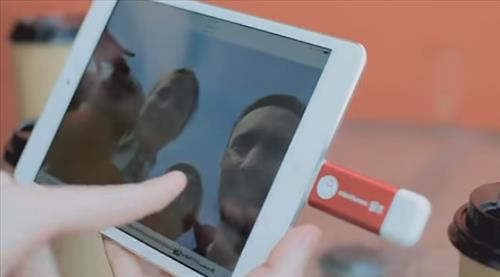 If you are like me and constantly running out of space on your iPhone there are a few things that can be done to get more space.

Some options include using the cloud, upgrading to a new phone, or using an external flash drive.

Using an external flash drive is a good option for me since I like having control over my files plus it is a quick easy fix.

While storing files on the cloud is an option I have never liked the idea of all me data being controlled by someone else on some remote server.

Not that I’m worried about someone spying on the files but just like to store my pictures and video on my own personal computer and media and will know were they are, even years from now.

So if you are like me and looking for a good external flash drive lets break down some popular options and see what is a good drive.

HooToo makes several types of flash drives that are popular for expanding storage on iOS devices. Like many iOS flash drives it has a lightning connector on one side and a USB 3.0 connector on the other side.

Having a USB 3.0 plug is a nice easy way to copy you files to a computer.

Any files can be copied to it such as music or movie formatted files.

It is the iOS operating system that will decide to play them or not including managing DRM and DCM.

Basically, an iPhone will see the files as they would on the internal storage and play them in the same way they would if the data was stored internally.

The lightning connector is short so if you have a large case on your phone it may need to be removed. This is a common problem with iOS flash drives and lightning plugs. For whatever reason they are almost never long enough to plug into an iPhone with the case still on.

HooToo uses an app called iPlugmate to manage the files. The drive is a good unit if you are looking for a quick easy fix to more storage space.

Like the HooToo it has both a lightning connector and USB 3.0 plug. One connector will slide in when the other slides out.

Again the lightning plug wont fit into an iPhone while the case is on.

It uses an app called iDisk me to manage files which is easy to use. The app has many nice features such as pulling up only music files or taking pictures or video and storing them straight to the flash drive.

You can also play music or watch videos straight from the drive.

I have been using this drive for a few weeks and it makes data management simple. I like the way it can be used on a PC with the USB 3.0 connector as well as iOS devices.

SanDisk is a known name which many will recognize.

It has a lightning connector as well as a USB 2.0 plug. 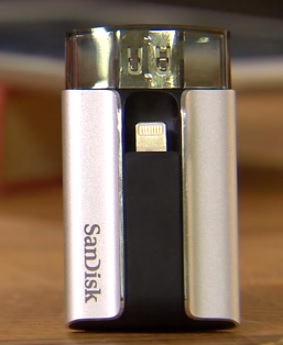 The lightning plug folds into the unit which is a different design than other units.

It can like most external drives play music or videos straight from the unit.

Summary
There are many people who will never use up the internal space on an iPhone or iPad, than there are those like me who never have enough internal storage.

This is especially true if you have a 16GB iPhone and still take lots of videos.

Having more room to keep all your files or back them up is a easy task with a compatible external flash drive.